The application of JOG Computer-Controlled Grouting

Mainmark’s JOG Computer-Controlled Grouting is a unique, award-winning multi-point cementitious grouting process which is used to lift structures and achieve level correction. This process is scalable and allows for structures of all sizes to be raised and re-levelled effectively, capable of lifts in excess of one metre.

Developed utilising over 25 years of global experience, the process uses a high-mobility cementitious grout mix; it does not affect ground water and is environmentally neutral. It is an extremely precise method for stabilising soils, consolidating weak ground and lifting foundations to deliver specific, engineered outcomes, regardless of complexity.

To showcase how the JOG Computer-Controlled Grouting process can be utilised in building projects, we will focus four key projects from small to large.

The annex to this historic Anglican Church had subsided by up to 26mm, causing it to separate from the main building. Mainmark’s JOG technology allowed for a more controlled and precise lift, which is critical for delicate buildings. Crucially, the majority of the equipment and grout was located away from the injection area and was delivered to the injection points via a sequence of hoses, avoiding excessive intrusion to the grounds.

A total of five injection points were used to lift the structure at its lowest point, closing the cracks and improving ground conditions. The work was completed within a two-day period.

A two-storey brick house was sloping, leading to uneven subsidence by as much as 82mm in the lowest position.  Access to the house was via a shared driveway that was narrow and sloping, meaning Mainmark had to configure all its equipment within a small lorry and then use that as a work platform to make the most of the limited space available.

Mainmark’s JOG method was the least disruptive option available to the homeowner because it did not require any structural demolition, removal or reinstatement of landscaping. Using JOG, Mainmark lifted the 64m2 home by as much as 82mm in just five days.

The ground underneath a South London business unit had weakened, resulting in the integrity of the building being compromised.

Multiple injection ports were installed through the concrete foundation and structural pads along the subsided section of the building, through which the JOG cementitious grout was introduced under computer control. The spacing and placement of the injection ports were tailored to accommodate the structural elements of the foundation, while the grout was mixed and pumped from just outside the unit’s main entrance.

The facility remained in operation during the entire re-levelling process and ground improvement was provided by Teretek® injection at various depths. Despite limited space the structure was successfully re-levelled by 138mm within 11 days while leaving the neighbouring property unaffected.

A kitchen manufacturer recently purchased a large 3,700m2 warehouse in Pontefract which was built on 20m of made ground in an area that had a history of mining activity.

The facility was experiencing subsidence and the building tilted severely towards the rear.

During the preceding 10-15 years, the building had subsided by 353mm below its original level, making it unsafe for workers.

The building owner was considering two main solutions: demolition and rebuild; or ground remediation to re-level the building and help arrest the subsidence.

Mainmark’s JOG technology was chosen (in combination with Mainmark’s Teretek resin injection solution) as this would allow for the desired outcome with minimal intrusion to the building. This method also allowed a portion of the building to be used by the client during the lifting process.

The project was completed in a time-efficient and cost-effective manner, well within agreed budgets and timeframes, achieving a maximum lift of 325mm.

Victor is the Operations Manager at Mainmark UK, with over 10 years’ experience in project management and construction management. Having joined Mainmark in 2009, he has managed projects in Australia, the UK and New Zealand including the remediation of the Christchurch Art Gallery which was shaken by the 2010 and 2011 earthquakes that hit New Zealand’s South Island, the old Bank of New Zealand building in Kaiapoi and Ultima Furniture’s warehouse in the UK. 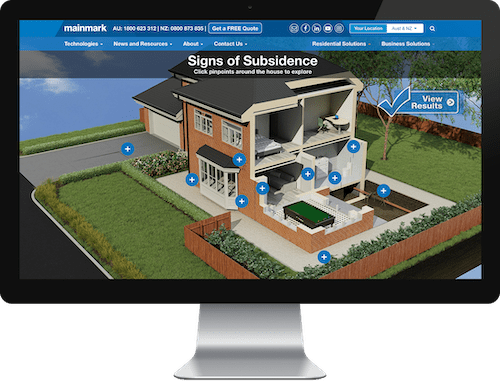